Everest trek starts from Kathmandu. Mostly we fly to Lukla.We have many trekking route like 7 days to 20day trek can be done. Mt. Everest, at 29,028 ft is the highest mountain peak of the world. Also, known by the third pole, Everest soars as Sagarmatha high above the sky and the clouds. This region also includes Lhotse (27,923 ft), Cho Oyu (26,750 ft) and Amadablam (22,491 ft). Everybody knows of Mt Everest and that is the simple reason. The trek has a number of stunning attractions, but it also has some distinct drawbacks which might well deter potential trekkers were it not for the undeniable plus point of being able to say you have been to the base of the highest mountain in the world. The attractions include spectacular scenery and the outgoing Sherpa people of the Solu Khumbu, the region where Mt.Everest and its attendant lesser peaks are located. The drawbacks include the long, hard slog to get there and the acclimatization problems caused by the regions considerable altitude. It’s not until you get right into the Solu Khumbu region that the Everest trek really gets interesting. The first part of the trek is not only a hard slog, but is also pretty sparse in the breathtaking views department. The hard slog comes about because the trek does not follow valleys-like the Annapurna treks-instead the Everest trek cuts across the valleys. So for day after day it is a tiring the other. The Everest trek starts in the Nepali speaking Hindu lowlands and ends in the Tibetan-Buddhist highlands where the Sherpa’s are renowned for their enterprise, hard work, civic responsibility and devotion to the practice of Buddhism. 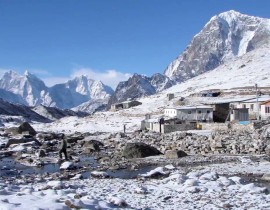 Chola Pass Gokyo trek offers you a panoramic mountain view from every spot. Following the famous... 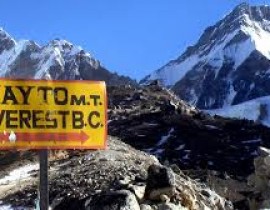 High in the priority list of trekkers, the Everest Base Camp is one of the most visited regions i...